Hi and welcome to this weeks SOS

I start this weeks blog with good news. My furlough will end on Monday at long last and I can return to work and try and get back to some sort of normality. The past 12-13 weeks have been weird and dystopian to say the least. I have enjoyed the time off immensely as on average I drive 35 – 45,000 miles a year for the last 28 years.

My garden has been a life saver and I have spent so much time in it I nearly run out of things to do in it. But as we all know gardening never ends and I still have a fairly big project if building a large new border in my front drive. This is in addition to the small one I built in the last few weeks. I am planning on starting the new border the beginning of next year once work has settled down.

Luckily this week we seem to have escaped all the heavy rain that sine of you have had. I have seen lots of posts on Twitter that people have lost lots of flowers. Out weather has been wet but without the drama.

Here is my six this week.

One of my little jobs this week was to tidy up my 2nd potting bench. I have moved it slightly so it get a more sun. After I tidied it up I spent the afternoon propagating more succulents and was pleased to get 15 more plants. One of the things I want to do in the future is set up a business to sell succulents at markets and events. However this will be sometime in the future as I still have a mortgage to pay and the economy is understandably not the most stable at the moment. I have spent this furlough period to work on practical ways to make this work and this has included what succulents are the easiest to propagate, to look after, look great even in a small pot and what size pots and soil mix to use.

2. Aeonium Goblin coming back from the dead.

I took the below photo in the winter when it’s bad been ravaged by the cold damp weather. It shouldn’t have been because I had it undercover. I cut off all the branches and re potted them and thankfully as you can see it has bounced back. I will make sure I plant in a more grittier soil fro winter.

This caught my eye this week when I walked past. It doesn’t show up well but it has a wonderful gold colour. This clematis has not produced that many flowers but the ones it did produce have been healthy and big. Hopefully next year it will produce more.

A new Allium I bought this year this one is smaller than I thought it was going to be. The flower heads though small are well formed and the petals are large if you understand what I mean. A pretty little plant but I think may have to move a few before they get swallowed up. 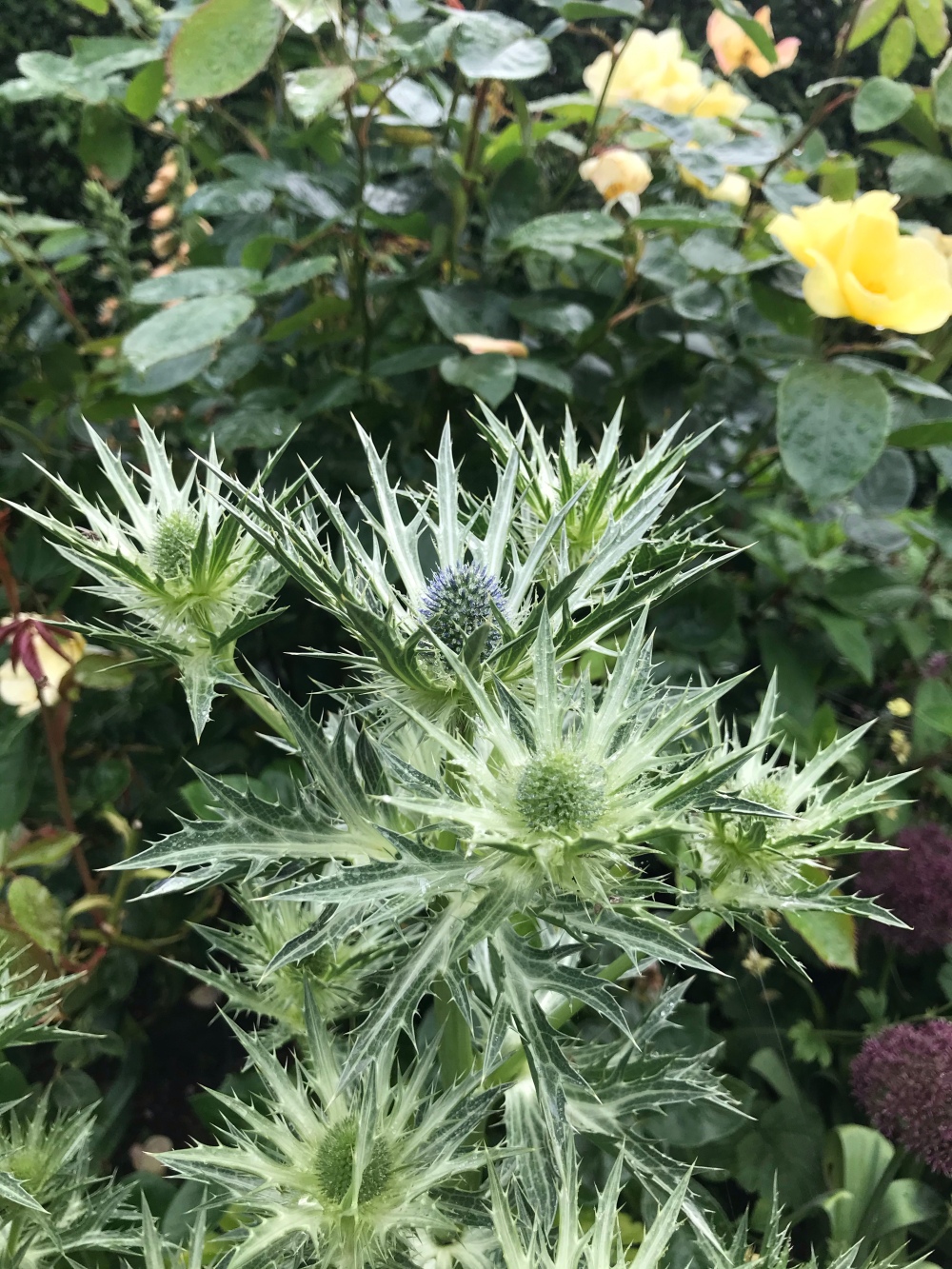 This plant as you can see is going to have loads of flowers this year which is going to keep the pollinator population happy in my garden for a couple of months. I have included it this year because of the shimmering effervescence of the foliage. If the sun catches it sometimes the colours sparkle like a glitter ball. At the moment the foliage has a wonderful silvery green colour and it should turn into a fantastic silver colour when the plant ages.

This plant grows well in my garden in fact to week as it gets it the way of the washing when it is on the line. I will probably move it next year when I give my main border a bit of a tidy up and split some of the perennials up. This is grade 1 nectar for the pollinators and as you can see the bumble bees love it especially. If you dead head it regularly this should have a long flowering period and last until the beginning of October.

I am going to make sure I spend a few extra hours in the garden this weekend before I go back to work. The weather forecast looks favourable.

If you want to write a SOS blog it is not that difficult. As always to find out how six on Saturday works please follow the following link The Propagator. The don of Six on Saturday.